The Rutland was built, in 1936, on the site of a previous pub. Plans from the time (Wm.Fenton, Architect, Sheffield for Duncan Gilmour and Co.), indicate that the footprint of the new pub moved about 10 m back, thus allowing the corner between Brown Street and Furnival Street to take up its current position. The new pub had a corner entrance, a vestibule leading into a public bar with a service bar. Before the Public Bar, on the right is a ‘Smoke Room,’ and on the left is a ‘Tap Room,’ both fronting onto the street. Upstairs is a club room. Off sales are available from an entrance on Arundel Lane, behind the ‘Service Bar’ (left rear). The remnants of this entrance can still be seen under the current-day window which is to the right of the ‘Off sales’ window. To the right of the ‘Smoke Room’ are both male and female ‘Urinals.’ The fact that these are not situated in the yard is an indication of the relative importance of this new build.

1952 plans (J.Foster, Architect for Duncan Gilmour and Co.) show the opening out of the public bar and smoking room into a larger Lounge Hall – see image. 1988 (L.B.Percival, Architect for Josuha Tetley and Son Ltd.) saw the lounge and tap room merged and the reconfiguration of the bar into its current position. 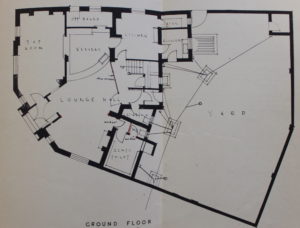 In addition to a considerable amount of Art Deco-style interior glasswork (installed in 1952) and eight original exterior windows (including ‘Smoke Room’ (2) and ‘Off Sales’), the Rutland has a very impressive tiled exterior. ‘DUNCAN GILMOUR & Co. LIMITED. RUTLAND ARMS.’