From the outside, the Eyre Arms is a handsome creeper-covered building with a walled garden to the side. You enter this 17th-century country pub via a front door which leads to a small entrance hall. On your left is a smoke room with a quarter-circle wooden bar: wooden tongue and groove of high quality. Behind the bar are fitted shelves. This small room has fitted wooden benches around two walls and a fire place which looks pre-war. A door on the rear wall leads to the cellar (to the left), the gents and, to the right, is a small snug.

From the entrance, on your right is a rectangular lounge which leads back into what was originally a sitting room. The central bar is opposite a massive coat of arms displayed on the wall above the fireplace. A wooden door leads left into the small snug, with views to the rear of the building. A further door leads to a corridor, the gents and the public bar. On the wall, a framed list of past licences goes back to 1753. The entrance form the hall to the lounge displays a fixed sign above the original words of ‘Smoke Room.’

A 1952 plan (Gerald Maynard & Co. D5328/21/3(i), Derbyshire Record Office, Matlock) shows the front entrance into a hall. On the left is a Tap Room (now the smoke room), while to the right are steps (up) and a Smoke Room. Ahead is a passage which runs the length of the two forward rooms with a bar counter ahead. The cellar is to the left of the bar, with a sitting room to the right. Further right are a Larder and Living Room.

The current layout and the 1952 plan suggest a mid-1950s refit which merged the two right rooms into a single lounge with the bar moving forward to its current central position and the snug taking the place of the bar counter and bar area.

We believe there have been no major changes since the mid-1950s. Apparently local craftsmen were used to do the work: stonemason for the fireplaces and carpenter for the bar front and wood panelling. Relatives of these craftsmen are still pub regulars. 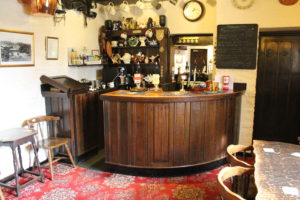 The pub sign shows the Eyre family coat of arms. The arms on the wall of the lounge belong to Rowland Eyre, a Royalist officer in the Civil War. The Eyres raised a regiment in Derbyshire and fought at the Battle of Marston Moor in 1644. The centrepiece is a solitary leg. Apparently, at the Battle of Hastings (1066), William the Conqueror was knocked from his horse. He was assisted by a soldier called Truelove who loosened the Kings’ helmet as his nose-plate was crushing his face. William then said “thou hast given me the air that I breathe – henceforth you will be known as Air (Eyr)”. Later in the battle, the King discovered that Truelove (Eyr) had to have a leg amputated. William told him that when he was recovered, he would give him some land. The soldier replied, ‘I shall call it Hope, for you have given me hope to live.’ There are two problems with this story: the Norman soldiers did not wear helmets of this type, and Truelove was an Anglo-Saxon name, not Norman.

The building was originally a farmstead, built in 1632. By 1753, ‘Eyre Arms as a Public House at Hassop.’ In 1814, the name changed to ‘Newburg Arms Inn’ and in 1902, it returned to the Eyre Arms. The pub has recently been proposed as a new entry on the CAMRA National Inventory of Pub Interiors.