Find out what it’s like working at the festival straight from our superb volunteer horses mouths. 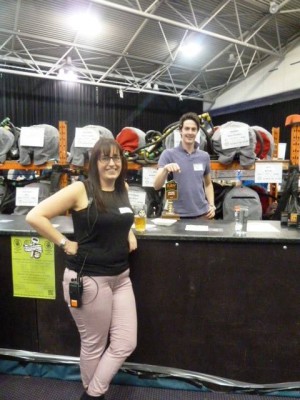 This will be my 3rd year managing staffing for the beer festival and the 4th that I have worked in Sheffield, so I was well and truly thrown in at the deep end!

My main job is pensions and as such the only thing I know about beer is that I love to drink it! So I take a week off work every year where I work 30 hrs and volunteer for over 80hrs at the festival! There are times over the week when I think why am I doing this? and the answer is always the same because it is such great fun. I get a great sense of achievement being involved in pulling together the festival for Sheffield and it’s for a great cause, the promotion of real ale and cider.

We start the planning in January and slowly each month it comes together to produce the festival. What this means for me is I sit there as they discuss pints per kiln and cooling and I get very confused. Then they mention something that requires need staff and I wonder where I can find more people from.

The answer is you! I have many jobs that I need help with. It’s not all serving beer. I have busy jobs, sit down jobs, jobs where you don’t have to speak to anyone if needed!

You may ask what is in it for me? Well the answer is if you work 4 hours you get free beer, a glass to put it in and you are already in the door so free entry! I have people who volunteer for a few hours on the Wednesday and then come back shift after shift.

If you would like to know more just get in touch.

Ever wondered what it is like helping out at a Beer Festival? I did for a number of years. It was one of the reasons I joined Camra back in 2000. I had worked in pubs and bars for 17 years, during which time I looked after a number of pubs whilst the manger went on leave. It was hard work but I got a buzz out of it.

I volunteered my services for the 2000 Beer Festival at the Students Union in Pond Street, (is it still there?). How different it was to what I was used to. There were no keg beers, lagers and spirits. There was no asking the customer if they wanted ice and lemon in their G&T, no asking if they wanted crisps or nuts they didn’t want but the pubco wanted them to buy.

For various reasons it wasn’t until 2012 I worked the festival again, doing a few sessions on the bar and helping with the breakdown. 2013 I decided to go the full hog and work the whole week, setting up, working the bar and breaking down. And what a week it was. I put more hours in that week than I did in a normal week at my everyday job, (all for the love of real ale and Camra). Being a novice at the set up, I saw how much was involved to get the venue ready. I have to smile at the fact we were in a sports hall. There were many experienced and knowledgeable heads orchestrating without being demanding. Racking went up, the bars went up, and the beers went on the racking.

After 2½ days of set up the festival opened. I couldn’t believe how many people turned up for the midday opening. In the blink of an eye I went from being festival constructor to barman. As the afternoon passed, the adrenaline kicked in and the barman in me came out. I was in my element, giving quality service and having banter with those who came in.

The bar staff were a mixture of old heads and those new to bar work. The newbies soon learnt the ropes with help at hand from the experienced. Two of the newbies enjoyed their time so much they wanted jobs in pubs.

There is one regret I have; it is not having worked the festivals more than I have. The buzz, enjoyment and what I get out of working what I have is on the highest of bars, sorry pedestals. I must have ticked a few boxes last year as this time I have been asked to be Deputy Bar Manager. There are still a good number of weeks before the festival and I already have the buzz.

Set up for this year’s festival starts on October 27 with breakdown on November 2 with the festival open October 29 – November 1, so if you fancy helping out, whether it be a session or two, (can you stretch it to three?) on the bar and /or helping with the set up and break down send us an email.

Nearly forgot, there is good beer (and cider) to be enjoyed.

Apart from the vast selection of incredible ales and cider from all over the world on offer, it is the mingling of people from all walks of life, united for a few days simply to enjoy themselves, which makes me love Sheffield Beer Festival so much. They say a pub is only as good as the landlord and it’s true, it’s the people who both run and attend the Sheffield Beer Festival which make it so special.

When I work on the cider bar my favourite thing to do is to guess which cider a certain punter will like. When I get it right, it makes my shift, the punter is delighted and many of them say they’ve discovered a newfound love of cider. Again, it’s the people who make the festival.

It was my husband, amateur cider-maker Brian Trevelyan, who first introduced me to beer festivals thirteen years ago when we met. In only just over a decade, how they’ve changed. Beer festivals really did used to be the preserve of real life “Real Ale Twats”, the popular comic strip from Viz, with which many of you will be familiar. Blokes with beards and beer-bellies, propping up the bar, guffawing and knocking back their pints with barely a woman in sight.

A few years ago, I noticed that the demographic was changing at every beer festival I attended. Suddenly there were more women. There were students, not a few of them but loads of them, in groups of males and female friends, all drinking sensibly with no trouble caused. Hipsters started to appear with a different type of beard, ones they’d only just sprouted to ride on the beard new-wave. And this new clientele spread from its beer festival spawning ground out into the world where a couple of years back there was a sudden explosion of “craft ale” pubs and “brew houses”, an explosion which led to real ale suddenly being hip and fashionable.

But it started at beer festivals. Now, beer festivals are a must-visit for any discerning hipster, the likes of which intermingle with the trad beer festival attendee, creating a wonderfully harmonious and inclusive atmosphere of real ale (and real cider) aficionados from every demographic, whether young, old, male, female, trad- bearded or hipster-bearded. As a woman, I particularly like the fact that every year there are more and more women attending. Sheffield Beer Festival is honestly somewhere I’d feel comfortable attending on my own. And I can’t say that about many High Street bars!

Volunteer Fill in the form to let us know when you’re available.