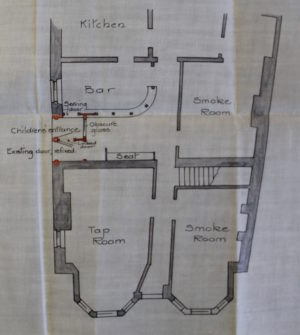 The Lescar (Sharrow Vale Road, S11) is possibly unique in that 1909 plans include the addition of a new ‘Children’s’ Entrance’ on the side of the building. These include a reference to ‘Obscure Glass,’ – presumably so that the ‘children’ could not see into goings-on inside. An earlier 1898 plan indicates a three-roomed pub with a single bar. Additions the following year add a large dining room to the rear of the building.

By 1913, the pub was owned by Mappins Masboro Old Brewery Ltd. 1955 plans, for Mappins, indicate that the Dining Room has become a ‘Concert Room’ and the bar has moved to its current position. The off-sales are behind the bar and the children’s entrance has become an entrance into the lounge. At this point it was planned to open out the Smoke Room with the use of RSJs. 1972 Plans indicate that this opening out did not occur. The current floor plan is otherwise identical to that in the 1955 plan.

The pub currently has a lobby entrance, Tap Room at the front and L-shaped lounge at the rear, both served by a central bar. There is also a  separate function room, with own bar. There are some Art Décor features including door fittings and copious wood panelling. The lounge has two fireplaces, one probably original (left) and the other bought-in. The site, itself, was previously a water mill. At the peak, in the 19th.Century, the 10 km length of the River Porter from source to where it joins the River Sheaf in the city centre, had 21 mill ponds serving 19 water wheels.