The first trip of the New Year was to explore some of the numerous pubs along Nottingham Road between Kimberley and Eastwood using a Derbyshire Wayfarer and a Trent Barton Zigzag day ticket. I travelled to Derby and then caught the Red Arrow limited stop service to Nottingham Victoria Bus Station to change on to the Rainbow One service which connects many of the places along Nottingham Road with a ten minute frequency for much of the day.

Half an hour after leaving Nottingham I arrived in Giltbrook and the Hayloft. This was quite a large multi-level Greene King pub with 7 hand pumps although only four were in operation, dispensing three cask beers and one cider. I chose a half of Olde Trip to start the day. 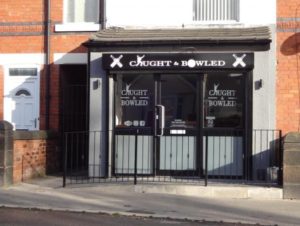 A couple of minutes walk away was the Caught & Bowled micropub with five cask beers available. This was the first micropub of the day and was in the long narrow style with the bar on the right and seating along the left wall. My selection was Hawkshead Gold.

Across the road to the same bus stop at which I had alighted and another Rainbow One took me the three stops to the Hilltop area. The first pub here was the Greasley Castle which is the largest traditional pub in this particular area. From the three cask beers available I chose a half of Ashover Poets Tipple. Nearby was the Tap & Growler (CAMRA Good Beer Guide 2020 entry). A small micropub but serving a very pleasant Anarchy Brewery Skin Deep which was in the ‘very cloudy orange juice coloured style’. Around the corner to another micro – the Pick & Davy. A complimentary homemade chilli sausage roll accompanied the Grasshopper Devil’s Horse Irish stout.

Two further bus stops along Nottingham Road deposited me in Eastwood. First call here and nearest to the bus stop was the Gamekeepers. This was a slightly larger micropub and I had halves of Pentrich Blank Maps stout and Blue Monkey Primate best bitter. Nearby was the Mellor’s Mews, just set back off the main road with some outdoor seating at the front. This had a more modern almost wine bar feel to it although the six hand pumps were dispensing four cask beers and two ciders. I had Oakham JHB. The Lady Chatterley was the only Wetherspoons pub visited today and two Dukeries beers were sampled – Santa’s Beer’d and S’no Wonder.

The last pub visited in Eastwood was the Dog & Parrot. Although there were several of the former in attendance I didn’t encounter the parrot. This was larger than the other micropubs I had visited today and had a larger range of drinks. From the cask selection I had a very enjoyable Muirhouses Tick Tock Boom and Cotswold Spring Godiva. It was then a very short walk back to the bus stop and a Rainbow One back to Victoria Bus Station.

I had a little wander around before getting a Red Arrow to Derby and found the Rose of England. A street corner local offering a pleasant Home Ales Apollo Orange to finish off with. I didn’t go for a drink in Derby on the way back but instead called in the Sheffield Tap (GBG 2020) for a half of Brew York Maris The Otter and then to the Old Queens Head (GBG 2020) for halves of Thwaites Good Elf and Little Critters Incubator Series New England Pale.

Some of the pubs visited today have restricted opening hours especially early in the week so it is advisable to check these before visiting. There are still quite a number of pubs in this area to visit but these will have to wait for another day. As a footnote I would like to thank both Richard Norris and The Didler for providing the inspiration for this Grand Day Out.