A group of Laurel and Hardy fans, Sons of the Dessert, took a mini bus to Ulverston in Cumbria, the birth place of Stan Laurel.

The Stan Laurel Inn has six hand pulled beers, mainly from local breweries and my
choice was Barngates Brathay Gold. 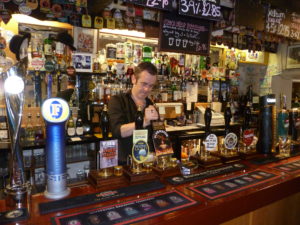 A few minutes walk away is the house where Stan Laurel was born so after seeing this we went to Ulverston Brewery, a former livestock market hall with brewery, bar and shop under one roof. Their beers are named after Laurel and Hardy films and the two on offer were Perfect Day and Lonesome Pine.

It was Festival Weekend and the town was busy with street food, stalls, entertainment,
bands and drummers and much more, even the bronze statue of Stan and Ollie was decorated with flowers and coloured scarves. The museum dedicated to the comedy duo showed some of their most popular films and the stage just outside had entertainment throughout the day.

Nearby was the Piel Castle Inn with high beamed ceilings, stone wall and fireplace. This Robinsons pub had four beers and I had Bonj Euros, a special blonde ale. All the pubs were busy and there was time to call in the Rose and Crown, a pub with five distinct areas and four Robinsons beers.

There were ten hand pulled beers at The Mill, four from Lancaster brewery and six guests. The pub was developed round a restored water wheel and the layout is on various levels. There are many other good pubs in Ulverston but not enough time to visit them all.