Gosh, we all love Christmas don’t we? Even if it gets earlier every year and people bang on about it in November (ba humbug!). There’s no better place on Planet Earth than seeing the Seven Hills dusted in white snow, the Five Rivers frozen over, and the good folk of Sheffield with smiles on their faces and bellies full of hearty ale.

So, why not kick off your Christmas festivities with The Sheffield Brewery Company this December?! On the first weekend of the month, we’ll be hosting our monthly Brewery Tap Room opening with the usual line up of our Finely Polished Beers – including this year’s seasonal special, a chocolate orange stout (because, let’s face it, we’re all disappointed when Santa doesn’t slip one in our stocking) made with real Terry’s Chocolate Orange – and artisan street food. 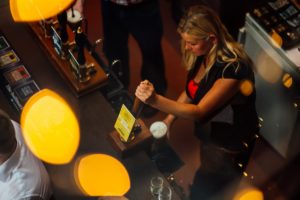 However, this year is extra special. On Saturday 2 December from 10.30am, we will be co-hosting (with Emmanuales) the Beer O’Clock Show’s renowned Crimbo Crawl, led by Steve and Martin from the podcast. The crawl will be staggering its way through some of Sheffield’s finest beery locations, starting at 10.30am with a pre-crawl gathering at the brewery, including mini-tours around the venue and Hopinions priced pints. Be sure to pop over to the Crusty Cob for one of the finest bacon butties in Sheffield, which you’re more than welcome to bring back to the brewery.

The following weekend, we’ll be hosting the Emmanuales’ It Came Upon The Midnight Beer beer and carols evening (see Emmanuales news for further details).

Don’t forget, our brewery now has an off license. So if you’re looking for a gift to show them how truly spectacular Sheffield really is, then swing by and pick up one of our gift packs. As usual, check out our website www.sheffieldbrewery.com for more details.