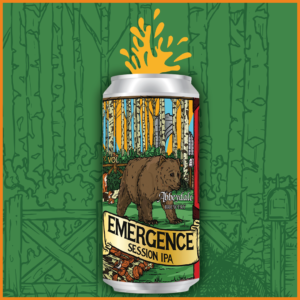 As pubs open for the first time in about 6 months, albeit just for outdoor table service and we all start to venture out after lockdown, Abbeydale Brewery have released a new session IPA to celebrate named Emergence. This flavourful yet easy going beer is a celebration on the palate and perfect to share in good company! It is dry hopped with Vic Secret and Galaxy for an irresistible aroma and a vibrant pop of flavour that is absolutely packed with tropical fruits.

Newest beer from Crosspool Ale Makers Society is The Lost Tribe, a strong and hazy 6% Pale Ale, with subtle honey and pineapple notes.

Little Critters Brewing Company have a couple of new beers out for April, OrangeUTan is a 7% ABV chocolate orange milk stout whilst Groundhog Daze is a 4.4% all day IPA. Meanwhile a new batch of Chameleon Galaxy has been brewed and canned, now available to order from them online.

Emmanuales are back brewing and already racked into cask and keg is “The Now and Not Yet” a 5.0% Dry Hopped Pale ale with Admiral, Jester and Galaxy hops.

Fuggle Bunny Brewhouse have stepped up their brew schedule now pubs are starting to reopen, through lockdown they have been running Friday takeaways which from 16th April will once again have a drink on site option available again although of course outside rather than in the tap room for now! They now have Russian Rare Bit Stout in stock. During March 3 specials were brewed –  pineapple crush Ipa, CBBees honey delight and ginger snap.

Grizzly Grains‘ move to their new premises is underway and are working hard to set their new kit up before resuming brewing.

Heist Brew Co‘s progress opening their new brewery and tap room in Neepsend has been somewhat delayed by the Coronavirus pandemic but work is now well underway completing the building, but this has hit them financially. They have launched a crowd funding intitiative to help get the place up and running, basically you “pay it forward” and get rewarded with benefits including a supports launch night with beer and food included. The venue when open will feature their brewery, 2 tap rooms with 30 keg lines, games arcade and burger joint.

Latest brew at Neepsend Brew Co is Antares, 4.3% New Zealand Pale hopped with Pacific Jade through the boil followed by healthy does of Rakau, Nelson Sauvin and Kohatu post boil and for dry hopping. This beer will be available exclusively on cask. Whilst Neepsend have been brewing through lockdown and selling beer in cans, now pubs are starting to open they are increasing the amount they are brewing, including cask beer and they were please to note recently that 6 out of the 7 tanks in the brewhouse were full of beer or wort! 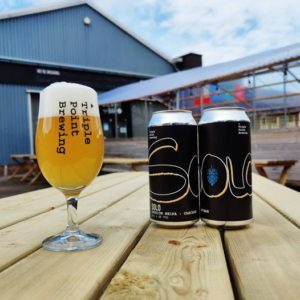 Triple Point have brewed the first in what they intend to be a series of single hop variety beers, “Solo”. This one is hopped with Cascade and is a 3.8% session strength New England IPA. It is described as Juicy, hazy and pale with  orange, pine, and lychee notes. This is available to order in cans from their webshop.

Blue Bee as a predominantly cask brewery that doesn’t do small pack has been somewhat in hibernation with very few pubs open to supply but with the upcoming opening of beer gardens have been busy brewing ready to supply! They have produced 3 beers – Nelson Moteuaka (4% ABV), Triple Hop (4.3% ABV) and Climbing up the Walls (5.7% with loads of citra hops) and are now doing a little work to finish off improvements to the brewery before the next brewday.