Kelham Island Brewery celebrated it’s 25th Anniversary back in September, we have had bottles of Anniversary Ale available all year, we also brewed it for cask (6.8% Celebratory IPA) through September & into October – limited stocks of both bottle and cask remain so be quick if you want to catch it! It is featuring at the Steel City Beer Festival 21-24 October. 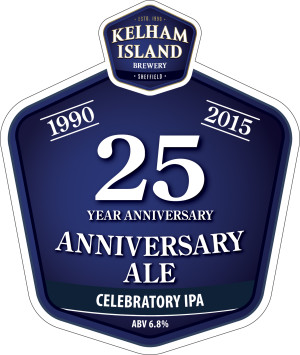 November will see the return of two ever popular specials: Bud Ekins, a 5% full flavoured amber bitter brewed with a selection of traditional British hops and a blend of British Pale & Crystal malts. Mind Control, 6.9% mind bending hypnotic IPA brewed with a double helping of a trio of the best aroma hops, perfectly balanced with a blend of malts for a mesmerising pale ale.

We have another new arrival in the shop in the shape (literally) of our rebranded bottle range, a slightly taller slimmer bottle with the new pump clip image for Pale Rider, Pride of Sheffield, Easy Rider and Riders on the Storm proudly sitting on the fronts of each bottle.

Our city centre pub, Tap & Tankard, have started having a live band on at least one Friday per month. Martin Bedford’s Honey Bee Blues Club are the kind promoters supplying a quality live act on the last Friday of the month. They are also operating a ‘Cask Ale Club Loyalty Card’ where you can buy 8 pints and get a 9th FREE. From the 1st November there will be a 10p discount on the price of any ale for CAMRA members who produce their card at the bar. Both offers run 7 days, but only until 8pm on Friday & Saturday’s.

As Christmas is fast approaching (too fast), keep an eye on our new website (www.kelhambrewery.co.uk) for upcoming Xmas Brewery Tour dates, individual and group bookings taken.

Enjoy the 41st Steel City Beer Festival, see some of you there!