A quiet autumn and winter at Steel City, mainly due to Dave spending a big chunk of it in America (he may even get round to writing an article for Beer Matters…) and the far east. Available now in bottles is War Pigs, an imperial-strength version of Craven’d Ale oat milk stout.

First collaborations of the new year formed a ‘brew sandwich’! On Friday Dave headed to The Dronfield Arms to mash in a kettle-sour with Edd at Hopjacker, then on Saturday to Raw to brew an ‘xtreme’ twist for both brewers, then on Sunday it was back to Dronfield to boil and ferment the sour…

The Raw brew Abandon All Hop Ye Who Enter Here features no hops! Instead, bitterness and flavour are derived from yarrow, orange peel, lemongrass, nettle and camomile. Dark brown in colour and distinctly floral in flavour, this is like no Raw or Steel City beer you’ve ever tried. 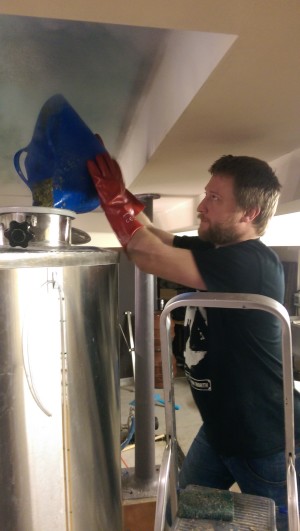 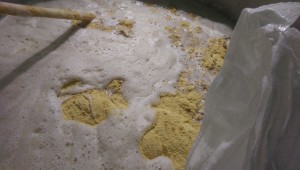 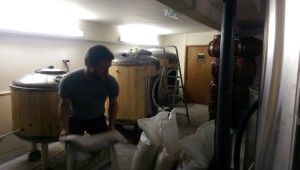 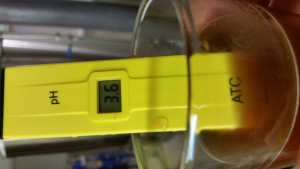 The Hopjacker brew End of Days is a variation on a Kentucky Common, itself an almost extinct beer style. The mash contained Chateau Biscuit malt and Flaked Maize, so far so traditional… However while traditionally Kentucky Commons were ‘slightly’ sour, End of Days was left to sour over the weekend with live yogurt, reaching a pre-boil acidity of pH 3.6 (IBUs are so 2012, it’s all about the pH now…). Bitterness was kept low as is traditional for the style but not the brewers! Finally a big (and untraditional!) flame-out charge of Simcoe, Mosaic and Cascade were added. Early tasting notes suggest a slightly toasty note from the Biscuit malt, huge hop flavour and a strong sour backbone. Hopefully a small batch of the brew will be secondary-fermented with Brettanomyces for a further twist.

The next collaboration is away again at Hopcraft, and will be the third Insult to History for both brewers, possibly a black steam beer.