After a couple of months brewing and becoming accustomed to our new home down at The Sheffield Brewery Company, March and April were good months for Emmanuales.

We delivered our first cask beer, Ryejoice, made with Nelson Sauvin and Simcoe hops to The Harlequin for a joint Meet the Brewer event with Exit 33 as part of Sheffield Beer Week; we appeared on BBC Radio Sheffield to talk about our beers and plans for the future; and three of our beers – Jonah and the Pale (5.0% Transatlantic Pale Ale), Ryejoice (5.4% Pale Rye) and As the Deer Pants For Porter (5.0% Smoked Porter) – finally hit bottle shops in and around Sheffield. 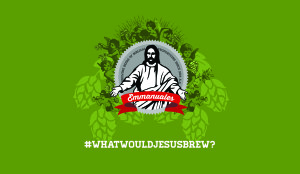 Even with the increased capacity to produce our beers, demand for Emmanuales is growing all the time. Our feet are barely touching the ground with early starts brewing and late night bottling sessions, all the while currently holding down a day job.

Over the course of this year, you can expect to see more events, as well as new beers. Later this year, we’ll be launching Hymns & Beer; two events – one in Sheffield and one in Oxford – with Emmanuales on tap and bearded hipster singer/songwriter Tom Read performing modern folk arrangement of timeless hymns.

Also, we’re currently brewing Ex Nihilo, a Russian Imperial Stout, an American amber ale (yet to be named; suggestions on a postcard!) and conditioning something very special…

Inspired by a salted caramel flapjack called Salty Jack, produced and sold by Gertie’s Cafe in Walkley, Salt of the Earth (4.8% Salted Caramel Peanut Ale) is made with oats, peanuts, and a collection of caramel malts.

Not only is this beer a celebration of a divine tray-bake, but raises up a glass to the good people of Walkley, who really are the salt of the earth.

Salt of the Earth, Oh Hoppy Day (6.1% IPA), Ex Nihilo and our American Amber Ale will be available in June.